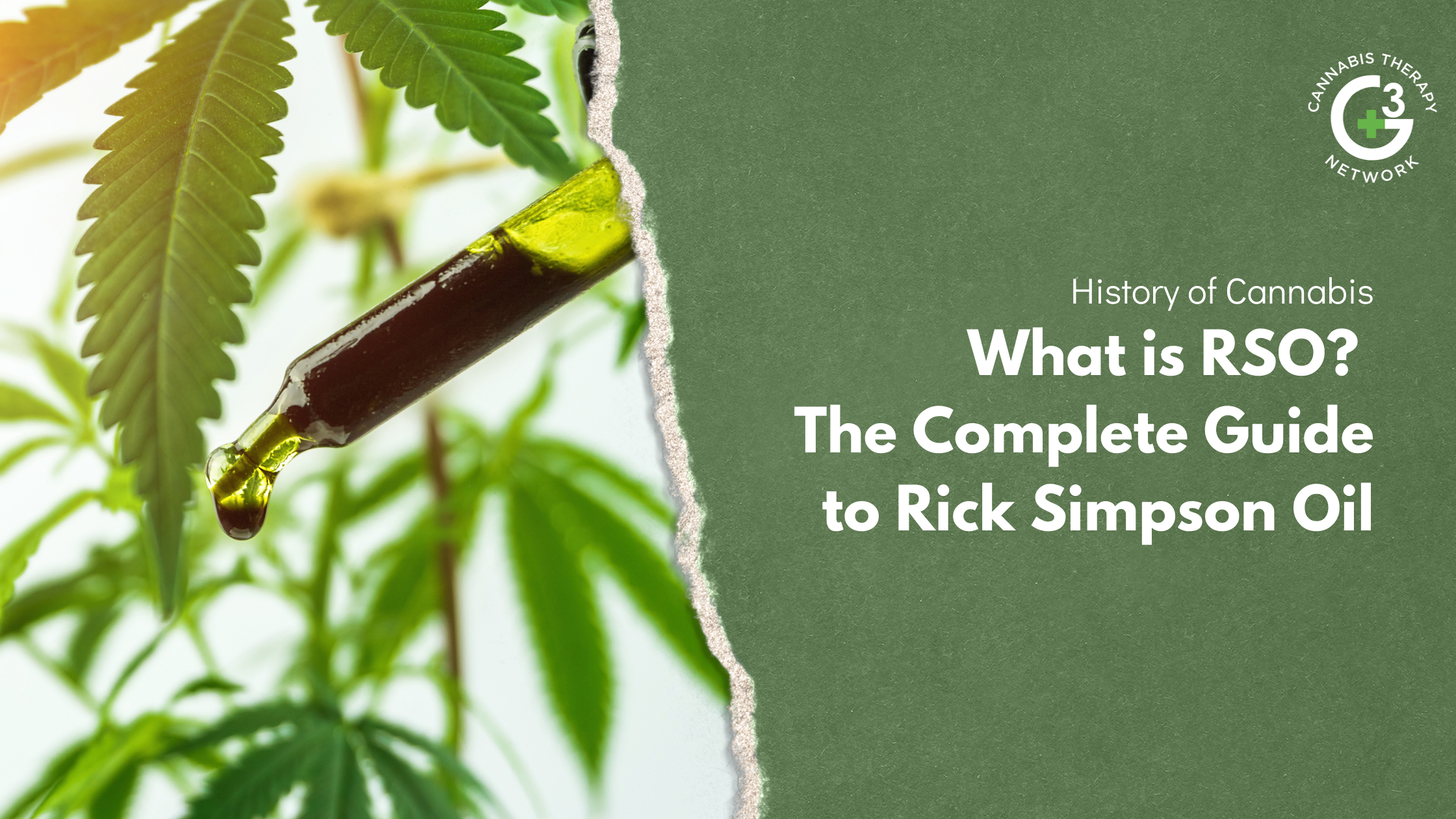 What is RSO? The Complete Guide to Rick Simpson Oil

THC, CBD, HTFSE, RSO… with so many acronyms in the world of weed it’s common to find yourself thinking, WTF? RSO oil is one key term to know especially for medical marijuana consumers. But why?
Find out with our complete guide to everything you need to know about the man, the myth and the legend, Rick Simpson and his namesake oil.

Like Jack Herer or Tommy Chong, Rick Simpson is a name that’s synonymous with weed. While you may have heard of RSO oil before it’s likely you don’t know much about the name or person behind it. Rick Simpson is a Canadian citizen who is now coined as one of the pioneers of cannabis extracts. It all began with an accident in 1997 when he was injured on the job as a mechanical engineer.

To address his symptoms, his doctor prescribed medications that had little to no effect and even made his symptoms worse. After viewing a documentary, Simpson began self-treating himself with cannabis with improved results from prescriptions.

In 2003, Simpson was diagnosed with basal cell carcinoma, a form of skin cancer. Because Simpson had used cannabis personally for other medical ailments, he set out to see if it could be a benefit for his newly found condition.
In his own research, he came across a study from the National Cancer Institute that concluded THC was successful in killing cancer in mice. From there, RSO oil was born.

How RSO Oil Came to Be

With this information, Simpson thought of ways to directly target the affected areas found on his arm. His final answer was a highly potent cannabis extract that was easily made without high-tech equipment or processing. In fact, the oil is so unrefined that the end product is a deep rich brown color and syrupy in consistency. After applying the oil topically to the basal cells, Simpson was shocked to see the cancerous growths disappear in just four days.

In awe, he obviously began shouting the fact from rooftops. Hence why he’s an icon for the thought or idea that weed can cure cancer today. Not to mention, once Simpson discovered the medical benefits of his RSO oil he began cultivating plants on his own, and made it his mission to deliver the plant’s all-natural to those in need, free of charge. Over the years, he successfully came to the aid of nearly 5,000 patients but not without troubles from the law.

To make what’s known as RSO today, Simpson came up with a process of using a solvent to isolate and separate beneficial compounds from the flower. By washing the flower material with a solvent like grain alcohol, butane, or ethanol, and then boiling away the solvent, the end-result is a thick liquid chock-full of the plant’s medical properties in a highly potent and concentrated form.

The pure nature of the RSO oil includes a full-spectrum of cannabinoids like THC, CBD, CBN, CBG, THC-a, and more. Plus a wide variety of terpenes, flavonoids, and phytonutrients. This combination is responsible for RSO oil benefits which we’ll discuss further next.

So, what are some unique RSO oil benefits that Simpson was so passionate about? The biggest advantage of any RSO oil dosage is the fact that it’s truly full-spectrum in nature. When consuming full-spectrum THC products like RSO oil, consumers can experience what’s known as the entourage effect. Which is the term given to the phenomenon of cannabinoids, terpenes and other plant compounds amplifying one another’s effects when consumed together.

As the research community still explores if RSO or other cannabis products can cure or positively affect cancer – we have learned about RSO oil benefits through self-exploration and experimentation. In fact, according to Rick Simpson’s own current website notes RSO may have the power to relieve symptoms or conditions like:

In addition to treating or relieving these specific ailments, RSO oil produces other commonly known effects and benefits of weed. Like, a psychoactive high, general relief, and mood elevation.
Another key benefit of RSO oil is the fact that it can be versatile in use. So to complete our RSO guide let’s finish with the ways you can use it.

How to Use RSO

Upon first glance, you might look at RSO and think – how do I use this? While RSO’s consistency may be somewhat off-putting at first its versatility, potency and strength quickly win over consumers. Here is a complete breakdown of the top ways to consume RSO dosages:

When creating his own oil, Simpson also developed a guide on RSO dosage and a regimen that can produce optimal results. If you’re interested in following the founder’s suggestion, his own method entails the following routine:

After 12-weeks, Simpson recommends 1-2 grams per month or you can continue use as needed or desired.

The More You Know

Now that you know more about RSO, you can better understand why Rick Simpson is so influential in the industry. RSO oil is beloved by medical marijuana consumers even today.
While research hasn’t totally solidified Rick Simpson’s initial belief that weed can cure cancer, rest assured, studies are still underway. Stay tuned for all the latest cannabis therapy and industry news to keep in touch.