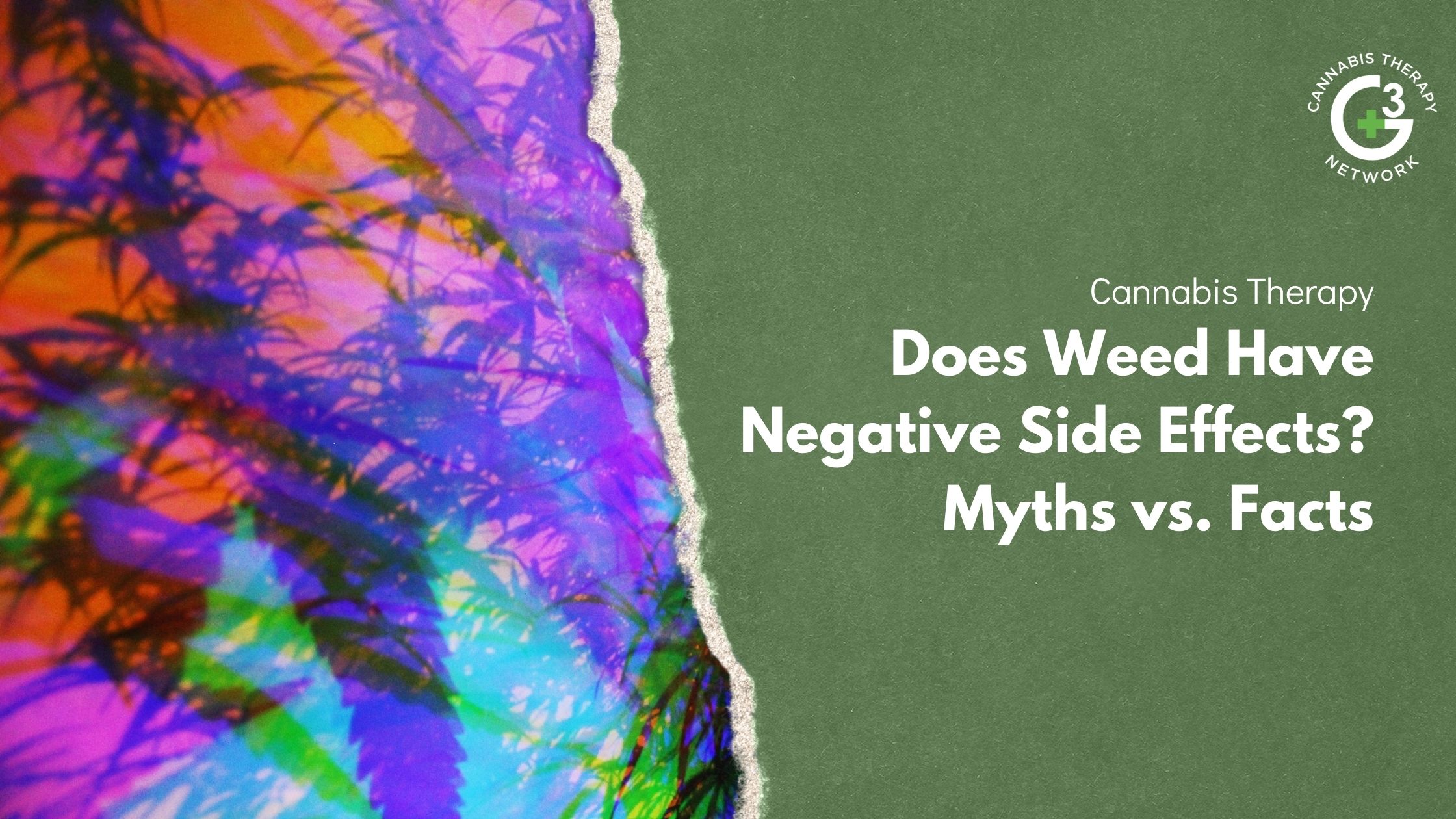 After decades of lies stemming from The War On Drugs, it’s no surprise there’s a stigma surrounding cannabis. When you look at the facts, what many have been ‘taught’ or ‘told’ about the plant is nothing but weed myths.

So what’s the truth behind actual weed facts and marijuana side effects? Let’s find out as we explore the top marijuana myths, and all the truths you need to know.

Like so many other topics in the world today, misinformation on marijuana began politically.

You can untangle the great lie more in-depth with our blog here, but basically, the powers that be wanted the masses to fear weed side effects. This initiative spread far and wide through propaganda, like the movie Reefer Madness and all the way to the ’90s with now-infamous commercials. Including, your ‘brain on pot’ and flat couch girl.

From the early 1900s all the way to the 2000s, society has been programmed to believe the portrayal of weed negative side effects. And with the government’s involvement in stifling research efforts, we’re now far behind what we could have definitively proven by now.

Luckily, through recent legalization and an increase of studies and use we know much more, especially when it comes to proving weed facts vs. weed myths.

So, let’s explore the truth about weed side effects next.

Let’s jump right into the top 5 weed myths and the realities behind them.

Myth 1: Marijuana is a gateway drug

Many ‘boomers’ still think that if you smoke dope you’ll be doing far worse soon. That couldn’t be farther from the truth for most consumers.

Marijuana being a gateway drug is a common myth often exploited by anti-drug campaigns. But a recent study conducted by the University of New Hampshire shows this ‘myth’ is overblown.

What the study did show is that other socioeconomic factors might segue weed use to other drugs. However, marijuana alone was not a prevalent ‘gateway’ to harder, dangerous drugs.

For so long, teenagers and kids have been taught – “don’t smoke weed, it’ll make you stupid!” But two recent studies are proving otherwise.

The fact that marijuana smoke contains carcinogens, like tobacco, is one reason why the lung cancer weed myth exists. Even with heavy use, cannabis consumers inhale far less than cigarette smokers do, making the chances of developing lung cancer far less likely in comparison.

This was proven by a 2006 UCLA study that determined cannabis use does not lead to lung cancer even when consumed frequently.

Myth 4: Marijuana can cause psychosis

Have you ever lit up and found yourself acting wild and unruly, uncharacteristically so? No? Us either.

But, anti-cannabis groups would like to make it seem like this is a distinct if not definite possibility. A prevalent weed myth that marijuana will make you crazy has been around for quite some time without any actual evidence backing it up.

Keep in mind, certain doses may cause you to feel anxious, paranoid, or toxic levels may cause psychosis. But these occurrences are so infrequent there’s no definitive statistics or proof.

Can you be addicted to healing common ailments and feeling overall good vibes? Well, of course. Which makes this weed myth one that’s hard to debunk or prove.

What experts are concluding so far is some consumers may develop addictive habits with weed. But not all consumers can or will become addicted. Even more confusing, one study did find chronic marijuana consumers are more likely to develop symptoms of an actual addiction.

However, in comparison to other ‘drugs’ marijuana is far less addictive, overall. Research shows around 9% of cannabis consumers became ‘clinically dependent’ vs 15% of cocaine users and 24% of heroin users.

For now, it’s good to know this potentially negative weed side effect and be conscious of any addictive developments.

Of course, we’d be remiss not to share what weed side-effects can occur that may be considered negative. For some consumers, you may experience:

If there’s one thing we’ve learned recently and from our past is you can’t always believe what you see or hear. Like the weed myths we learned about today.

With that said, continue to stay hip to all the latest cannabis news and research from sources you can trust. And if all else fails, rest assured knowing the truth about weed facts and feeling safer in consuming, overall.