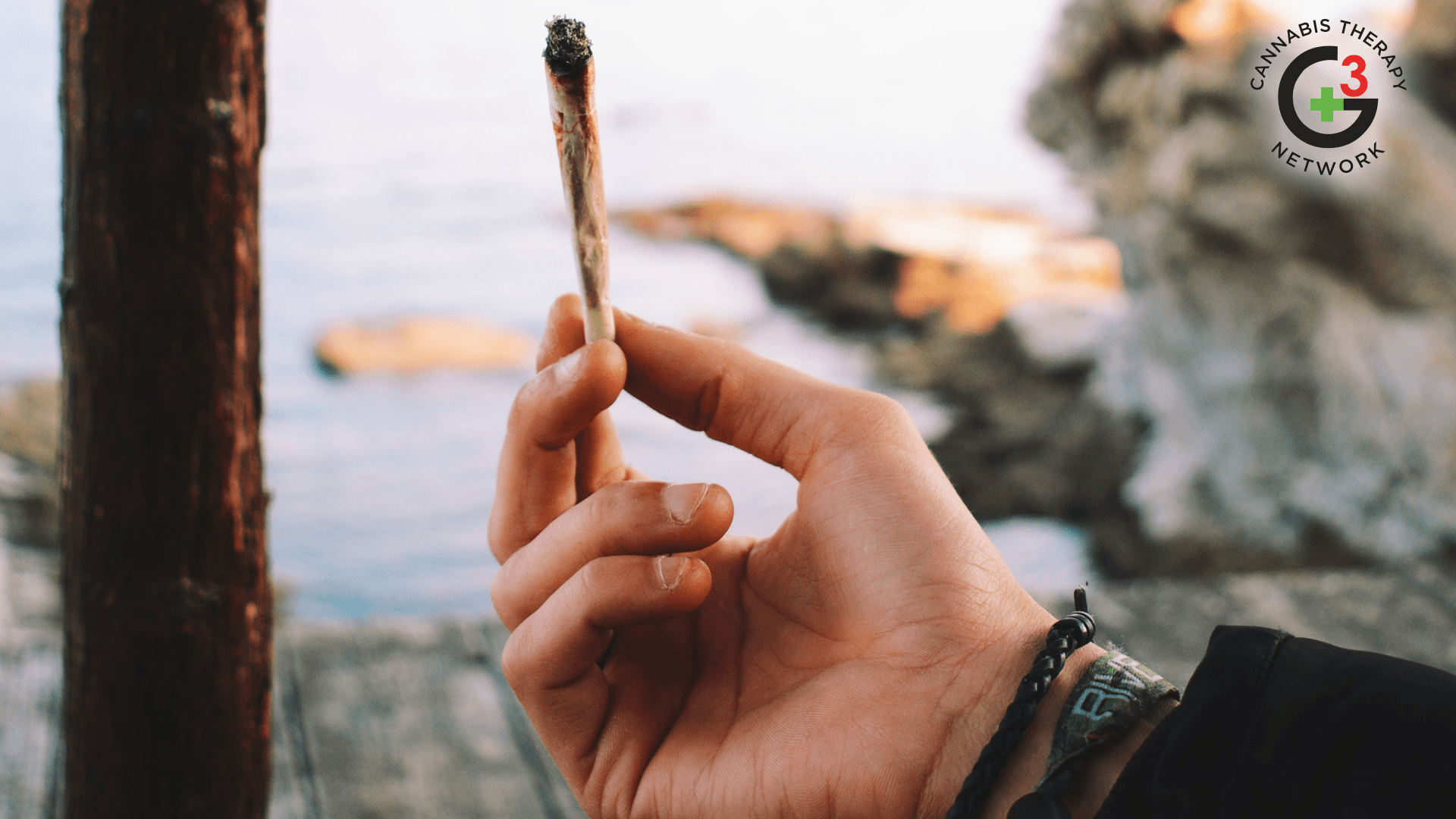 Is cannabis addictive? How about when you compare it to nicotine, alcohol and caffeine? You may be surprised at the answers.

According to the CDC (Centers for Disease Control and Prevention) reported that there were 22,246 alcoholic liver disease deaths, and 35,823 alcohol-induced deaths (excluding accidents and homicides).

According to Web MD, “Drinking alcohol was found to be associated with opioid release in the nucleus accumbens and orbitofrontal cortex — two areas of the brain associated with reward processing.” Those who are heavier drinkers have more of these ‘rewards’ flowing in their brain compared to those who are light or moderate drinkers. This suggests that the reason people drink more is because they are getting more reward from it, compared to those who drink less, they get less of a reward, so they’re less likely to do this. Now, being rewarded doesn’t alone mean it’s a bad thing, but we know alcohol is dangerous, and can kill your liver. Those who are alcoholics know that when they start drinking, they have an issue with stopping drinking, they just drink and drink, basically until they pass out. This kills brain cells, and hurts your body. 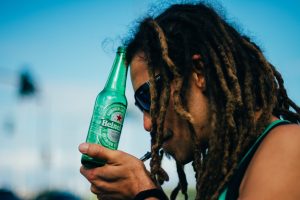 It is also a known fact that alcohol is proven to agitate violent behavior while cannabis tends to calm. Cannabis has no proven long-term effects.

When I think about addiction, I think about what happens when you don’t take the substance. For alcohol, you have withdrawls, and symptoms include shaking, being more anxious, headaches, and even vomiting. 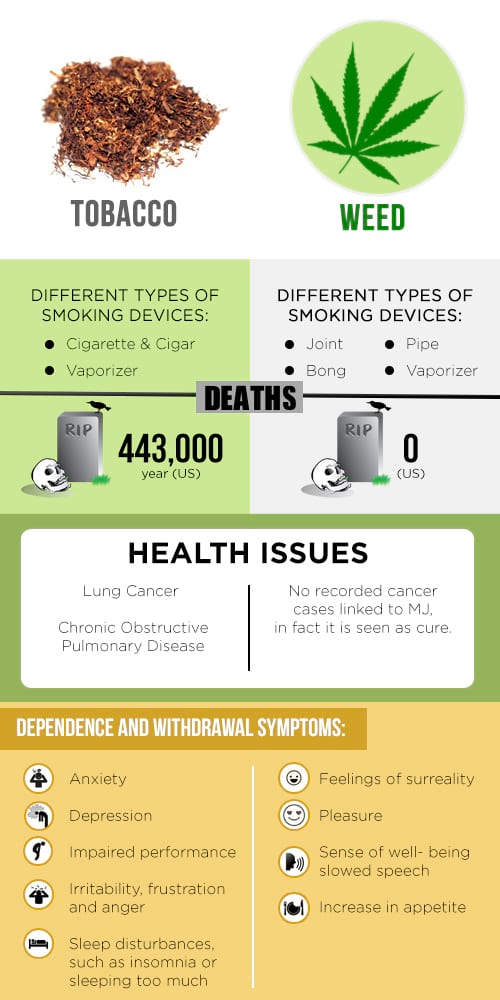 Nicotine is so addictive, it has its own term: Nicotine dependence, or tobacco dependence. According to the Mayo Clinic, This is when you can’t stop using the substance even though you know it’s causing you harm. We don’t even need to argue or tell you that nicotine is addictive. Some of the symptoms of nicotine dependence are:

Some of the withdrawal symptoms that come along with quitting nicotine are:


These symptoms alone should be enough to keep people from wanting to smoke nicotine, but with the introduction of vape pens there has actually been an increase in people smoking, especially younger adults, using vape pens and thinking it’s safe.

Surprise, surprise! In a study conducted by three different doctors where they were asked to rate the addictiveness of cannabis vs. five commonly used drugs, cannabis unanimously came out on the bottom of the list. Click here to see the report.

To sum up the comparison of cannabis and caffeine, cannabis is concluded to be more or less on the same level as caffeine, which as we all know, is the “drug” least likely considered harmful.

Even though these doctors rated caffeine in the same category as cannabis, again I like to look at withdrawal symptoms to see if a substance is addictive or not. If you take enough caffeine over time, your body gets used to it, and if you don’t give it caffeine what happens? You get headaches, are fatigued, you have anxiety, or difficulty focusing, can be depressed and irritable.

The question of the day! Is cannabis addictive? Short answer, no! It’s not! While cannabis can be habit forming, it is not addictive. You may feel like you want to smoke, but you don’t ever feel like ‘if I don’t smoke cannabis right now I’m going to lose it’ the same way you do with nicotine, alcohol, or even caffeine. There are studies that say cannabis is addictive, but when you consume it yourself you’ll be able to tell that you don’t get cravings, you don’t feel bad when you go days without smoking. As a heavy cannabis smoker (around 3 grams per day), when I don’t smoke cannabis, I don’t feel bad, or feel like I have to. I may feel like I want to smoke it, but I don’t feel like I have to smoke it.

Personally, I have never experienced one of these symptoms when I don’t smoke cannabis, and neither have a lot of my friends who are heavy smokers. What I find interesting is the withdrawal symptoms are all ailments that cannabis cures, so maybe it’s not a withdrawal, but rather just ailments coming back since you’re not treating them. If you get gout, and don’t take your gout medicine you gout comes back. You’re don’t say the gout treatment gives you withdrawals that causes the gout to come back, you just stopped taking your medicine and the gout comes back!


Let’s look at how many deaths from cannabis are there: none. There are no reported deaths due to cannabis. So is cannabis addictive? The short answer from us is no. The low amount of withdrawal symptoms, compared with no deaths or illnesses caused my cannabis tells us that cannabis is safer than these other drugs. But again, use your own judgement for what you put into your body.

What do you think, is cannabis addictive? Let us know in the comments! Still have questions? Contact one of our expert cannasultants today and let us know!

After fracturing his pelvis in his junior year of high school, Earl Carruthers became a medical cannabis user under Michigan’s Medical Marijuana Act (MMA) in 2008. He intensely studied how to grow the plant and eventually opened the Green and Greener Grow Collective to help other medical marijuana patients experience numerous benefits. In 2012 Earl was pulled over while carrying what he thought to be a legal amount of medical marijuana for himself and four other patients. Since then, he has been in and out of court fighting these charges and attempting to re-define the term “usable marijuana” under Michigan law. Now Earl is committed to furthering medical marijuana rights for himself and his patients and continues to fight the good fight.

All You Need to Know about Cannabis Edibles

We bet you didn't know these facts about cannabis

Discover the 3 Must-Knowns About Cannabis Therapy! This FREE ebook will answer your most important questions about cannabis. Sign up below and embark on an educated canna-journey today.