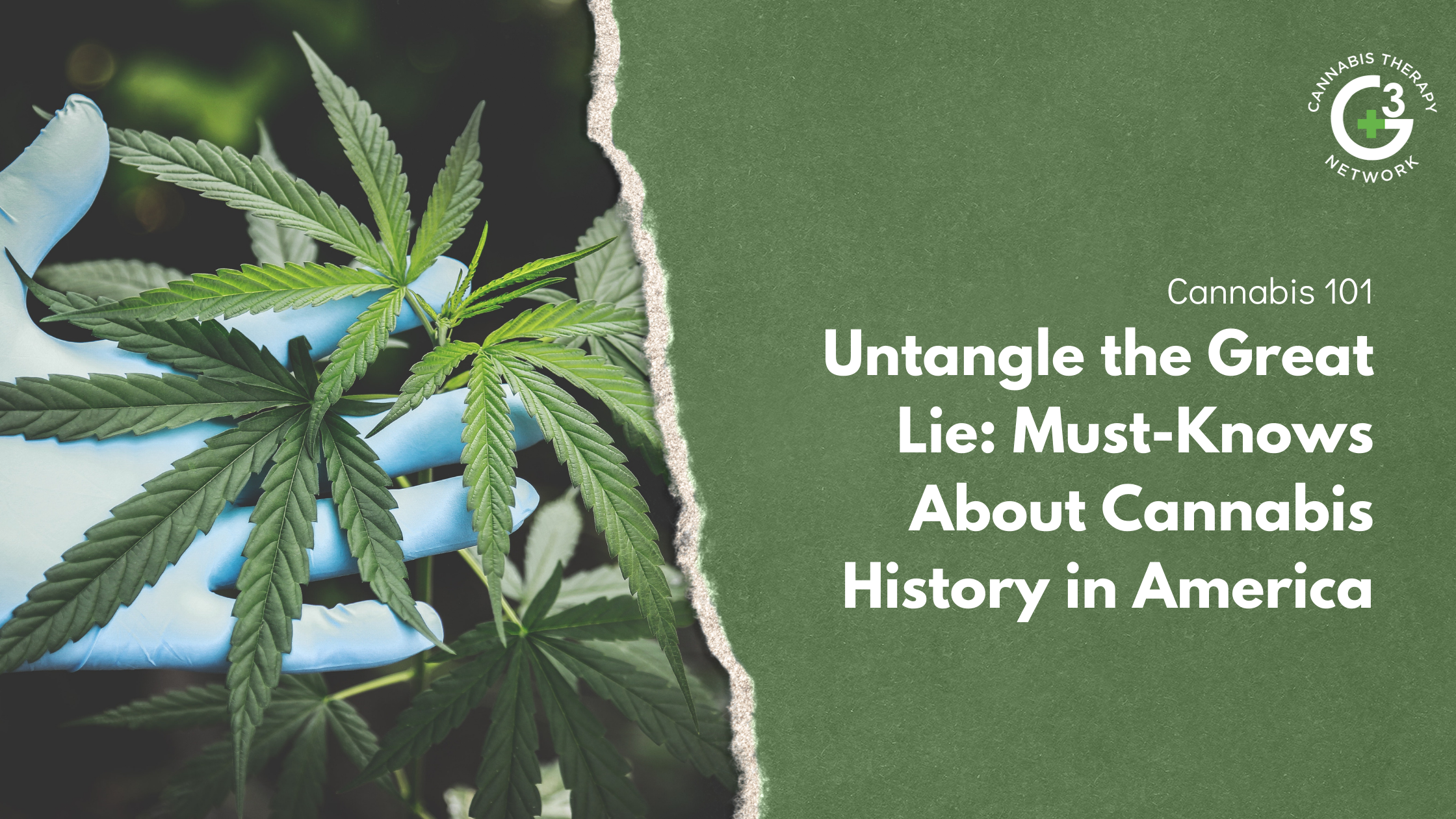 Untangle the Great Lie: Must-Knows About Cannabis History in America

In today’s society, legal weed is becoming increasingly ‘normal’. Especially as more and more states legalize recreational or medical use.

In fact, for some generations, they’ve grown up only knowing cannabis as legal. But for others, cannabis history in America hasn’t always been so positive. No matter where you go – you can never forget where you came from.

Way back when… pot was free

Before rising legalization, there was actually a time where cannabis use was rampant and pot was able to grow free. When asking yourself – how long has marijuana been around? You can now confidently answer, cannabis has been grown and consumed medically and recreationally for quite some time.

Cannabis history in America dates back to 1619. When the State of Virginia actually passed a law requiring hemp to be grown on every farm in the colony. At this time, hemp was also considered a form of currency in Virginia, Pennsylvania, and Maryland. Beyond bargaining, hemp was also used for fabrics, textiles, and other commodities.

But as cotton rose in popularity, hemp production started to drop. Soon after, and during the post-Civil War era is when marijuana had its time to shine. As the plant’s therapeutic qualities began to rise in popularity, it was increasingly used in tinctures for medical purposes.

The rise of restrictions

By the 1900s however, the US government began to intervene with the second most notable event on the cannabis history timeline. In 1906, the ‘Pure Food and Drug Act’ was created and required the labeling of any products that contained cannabis for over-the-counter use. Soon after, cannabis history in America took a turn for the worst.

After the Mexican Revolution in 1910, Mexican immigrants began to flood the States. With their assimilation, they introduced to the US what’s known as ‘recreational use’ today. Many immigrants used cannabis for non-medical purposes, and soon the leaf was associated with the newcomers in America. Unfortunately, intertwining cannabis with the fear and prejudice that was culturally fueled.

As Americans began to suffer from the Great Depression in the 1930s, resentment towards Mexican immigrants increased even further. Especially as unemployment skyrocketed. Unfortunately, marijuana and its use by the immigrants became the scapegoat for much of society’s anger. Despite all the therapeutic benefits that cannabis could provide, public and governmental concerns were ignited. By 1931, 29 states had outlawed Marijuana explicitly.

Meanwhile, to address growing public fear, the government’s involvement with marijuana and other illicit drugs increased. In 1930, the Federal Bureau of Narcotics (FBN) was created announcing the Uniform State Narcotic Act shortly after in 1932. This act passed along the responsibility of controlling the rise of marijuana, onto the states which of course – many had already outlawed the plant, individually.

The beginning of big business involvement

Some things never change and big business was quick to jump on the public concern. But mostly because it worked in their favor. Which media mogul and documented racist publisher William Randolph Hearst knows all too well.

It was Hearst’s “yellow journalism” that drove early propaganda campaigns and led to a rise in restrictions. His money even backed the production of Reefer Madness, a movie produced in 1936 that promoted anti-cannabis culture at the time. Why, you may ask? Like they say… money is the root of all evil.

Hearst was a businessman who owned timberland that made paper for his newspapers. His motivation was greed and racist, because he wanted to protect his holdings from the development of hemp and cannabis products he saw as only used by “immigrants and black people”. His controlling interest in newspapers created what we now know as “Fake News”. Which not only targeted pot, but also solidified the laws of segregation in the southern and western states known as “Jim Crow”.

Not far after Reefer Madness debuted is when the federal government took further steps towards restricting cannabis use. Just a year later, in 1937, The Marihuana Tax Act went into effect. This act criminalized marijuana and restricted possession, and use. From there cultural and leader perceptions were not quick to change. Later in the ’50s, restrictions continued as mandatory sentencing was set in place by the Boggs Act in 1952 and the Narcotics Control Act in 1956.

In the ’60s and ’70s, the hippie counter culture spread marijuana use to the masses. At a time when anger towards the government (think the Vietnam War, Watergate, etc.) was rising, too.
Over the next few decades, the popularity of weed continued amongst a growing population while parent advocacy groups and others kept fighting against it. This era segwayed into the ’80s and ‘90s where the government kept increasing its involvement.
With the creation of the DEA, Anti-Drug Abuse Act, and the announcement of the ‘War on Drugs’ by President Bush in 1989. D.A.R.E programs set off across the country for kids to learn the ‘harms’ of drugs, as now-infamous TV commercials displayed negative effects kids could face if using marijuana.
By then, advocates like Jack Herer, Rick Simpson, and others, had already begun fighting the good fight for pot. Knowing the plant provided true medical effects, and experiencing its therapeutic benefits first-hand. Once private research was increasingly funded in the early ’90s, the cultural shift towards using marijuana for medicine was on.
The revolution in favor of pot had its first milestone in 1996. When the State of California legalized medical use. Over the next 24 years, until the present day, legalization and favoring opinions for medical and recreational use rapidly grew in support.
Today, 36 states have legalized the medical use of marijuana, with 18 states granting permission for recreational use. Even allowing many US citizens to grow their own from home, without repercussions or penalties.
Plus, now more than ever, federal movements are underway to decriminalize, legalize, and tax marijuana with growing public support. Including 2021’s progress for the SAFE Banking Act, and MORE Legalization Act.

A bright future for lighting up legally

Now that you better understand the deep-rooted lies that plagued cannabis history in America, you can see how we’re only in the infancy of change now. Today, many generations are still trying to de-program what they’ve been taught or know about cannabis in general. Which, patient by patient, consumer by consumer, is slowly evolving over time.

Keep up with the latest in the industry and keep spreading the good word on weed. Sooner than later, the history of cannabis in America will reach a new milestone – with nationwide, federal legalization and the freedom for all to light up legally.